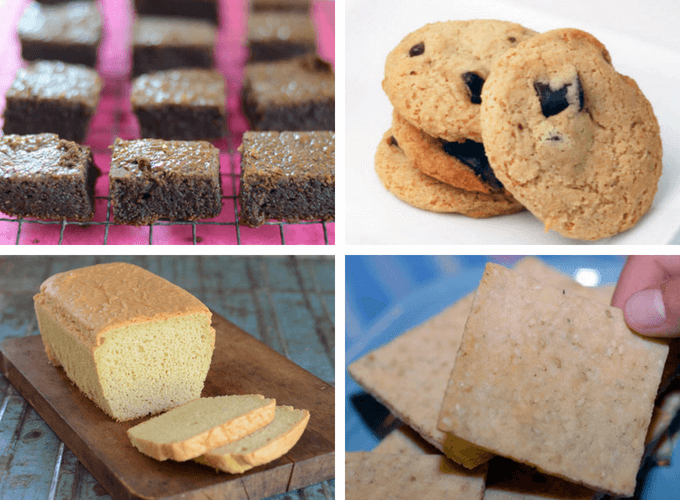 Almond flour is a superfood, it’s low-carb and far more nutritious than most other flours you can find. I’m incredibly passionate about almond flour! I went gluten-free in 1998 and knew right away that the usual high-carb, gluten-free flours would not be my ticket to health.  Here are 10 low carb almond flour recipes that are great for Keto or Low-Carb diets.

I love almond flour so much that in 2008, I wrote an entire book of almond flour recipes called The Gluten-Free Almond Flour Cookbook (and provide nutrition information too)! It was the first grain-free cookbook from a major publisher. Random House has always been an incredible publisher well ahead of its time!

Is Almond Flour Good for the Keto Diet?

Because it has more fat than protein and carbohydrates combined, almond flour is the perfect keto flour. If you’re on a low-carb, high-fat (LCHF) diet you’ll want to take a look at my Keto Diet Recipes page for sure!

Almond flour is an optimal choice for my family because it’s far more nutritious than typical starchy gluten-free flours such as rice, corn, potato, and tapioca. It’s also a great choice for us because it has fewer carbohydrates, and more protein than wheat flour itself, as you can see in the table below.

Nut-Free Recipes for Those with Nut Allergies

While almond flour works well for my family, I do understand that it doesn’t work for everyone. Some people are allergic to nuts. That’s why I have tons of Nut-Free Recipes!

The best thing about almond flour is that it tastes delicious! For those of you that love almond flour as much as I do, here are 10 great low-carb almond flour recipes!

What is Almond Flour?

Almond flour is blanched almonds, skins removed, that are very finely ground. I have tons of additional information on almond flour and also a fantastic article that answers a question I get asked a lot, which is: What’s the Difference Between Almond Flour and Coconut Flour?

Where to Buy Almond Flour?

Buying the right type of almond flour is critical for success in baking! For more information on where to buy the best almond flour go to my Why Almond Flour Page!

My latest New York Times Best Selling cookbook, Paleo Cooking from Elana’s Pantry, is gluten-free, grain-free, as well as dairy-free and nightshade-free! All of the recipes are low-carb and I provide nutrition information for all the folks on a Keto Diet counting their macros!