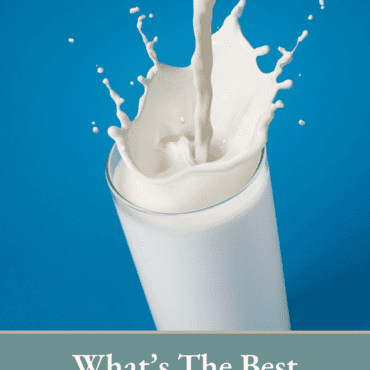 If you’re wondering What’s The Best Milk For Keto, I’ve got you covered.

With everything from the best keto cow’s milk, to low-carb healthy milk alternatives, you’ll have so many options you won’t even realize you’re on a special diet.

What’s The Best Milk For Keto?

We love drinking a nice tall glass of milk with our Keto PBJ and splashing it over Magic Spoon keto cereal.

When you follow a Keto Diet a lot of thought goes into the meals you eat, the type of bread used for sandwiches, and much more.

There’s no reason to blow your Low-Carb Diet with a glass of high-carb milk. That’s why I’m here to help you figure out What’s The Best Milk For Keto.

How Many Carbs In Milk?

If you’re on a Keto Diet and wondering how many carbs there are in cow’s milk the answer may not be what you’re hoping for.

That’s because whole milk has 12 grams of carbs per 8 ounce glass. Whole milk is not a keto-friendly food, and certainly not a good choice when counting carbs on your keto diet.

Can You Have Heavy Cream On Keto?

If you can have cow dairy in your diet, heavy cream is a great keto milk option, though it doesn’t really have the same taste or mouthfeel as cow’s milk because it is so creamy and high in fat that it’s almost greasy.

But it’s the high-fat content that makes heavy cream the perfect keto milk for those following intensive therapeutic ketogenic diets where only 20 grams of carbohydrates per day are allowed.

For more on that check out my Interview with the Top Keto Diet Expert in the World.

What Are The Best Milk Alternatives For Keto?

If you’re on a Dairy-Free Diet heavy cream won’t work for you, but don’t worry, I have plenty of other keto milk options!

There are several low-carb milk alternatives for keto that will rock your special diets world.

I think the best milk for the keto diet is almond milk. It’s my favorite because it’s very low-carb and has incredible flavor and mouthfeel.

The benefits of drinking almond milk are numerous. Almond milk is dairy-free, vegan, and low-carb to boot.

And there are a number of additional pluses when it comes to almond milk nutrition because it’s high in:

If you’re wondering how to make your own almond milk I have a fantastic Homemade Almond Milk recipe for you.

Along with that, I have phenomenal low-carb recipes for using the leftover pulp from the almond milk so that nothing goes to waste!

I’m often asked, does almond milk need to be refrigerated? The answer is a resounding yes.

That is unless you buy shelf-stable almond milk in a carton. Once you open that carton it loses its vacuum-packed seal and will need to go right into the refrigerator.

As you may have guessed, I’m a huge fan of almond milk.

I’m so in love with almonds that I wrote The Gluten-Free Almond Flour Cookbook in 2008.

If you’re not as head over heels for almonds as I am then check out my milk substitute recipes for homemade:

When it comes to low-carb, keto milk alternatives the possibilities are seemingly endless.

Sweetened almond milk is not a keto-friendly food.

Coconut milk is also a fantastic keto-friendly food. Just be sure to buy unsweetened coconut milk.

If you’re on a Keto Diet you can use canned coconut milk as long as it’s unsweetened.

I use canned coconut milk in most of my recipes that call for coconut milk like Paleo Pumpkin Pie and 3-Ingredient Keto Chocolate Pudding.

Is Coconut Milk In The Carton Keto?

You’re in luck again if you’re looking for more keto milk options because as long as it’s unsweetened, coconut milk in the carton is a fantastic keto milk.

We like this in our Magic Spoon Cereal, and also in Ginger Licorice Tea.

My husband uses this type of coconut milk for his morning coffee, and I love it in my Dandelion Coffee because it’s so creamy and reminds me of the days when I drank actual coffee and added real heavy cream to it.

Those days are long gone since my body does not tolerate caffeine.

As I’ve grown older, I’ve also realized that I’m somewhat carb intolerant, so the keto diet is fantastic for me.

Is Oat Milk Good For Keto?

When my boys are home I keep oat milk in the refrigerator. They say it tastes fantastic.

Some of their friends have even asked me –is oat milk dairy-free? Yes, apparently it tastes so creamy that people can’t tell the difference between oat milk and cow’s milk.

Oat milk is not an option for me for a couple of reasons.

When I was diagnosed with Celiac Disease in 1998 I went on a Gluten-Free Diet and when that didn’t do the trick, I went on a grain-free Paleo Diet shortly thereafter.

I haven’t eaten any grains in decades so oat milk is not an option for me. Furthermore, it is a high-carb drink so a double no-no.

Is oat milk a keto-friendly food? The answer is no. Oat milk is not keto.

What’s The Best Milk For The Keto Diet?

I’ve compiled the table below so that you have the macros for milks at a glance.

As you can see, heavy cream, almond milk, and coconut milk are the clear winners because they’re low in carbohydrates.

If you’re on a dairy-free diet and looking for healthy milk alternatives, the best low-carb, keto replacements are almond milk and coconut milk.

They’re both delicious on low-carb keto cereal like Magic Spoon.

If you are wondering if almond milk is vegan, yes it is, and so is coconut milk.

Mr. Pantry, who now follows my low-carb diet LOVES almond milk on Magic Spoon keto-friendly cereal. Other times he has it with coconut milk from the carton for an extra creamy treat.

I just pulled a batch of my Crispy Chocolate Chip Cookies out of the oven and poured a tall glass of my favorite brand of almond milk to drink with it.

Something about this makes me so happy, probably because it reminds me of having cookies and milk in the old days when I was growing up!

We also love almond milk with my Keto Brownies for a classic treat.

What’s your favorite go-to milk that’s low-carb and keto-friendly? Leave a comment and let me know. And if I missed anything I’d be happy to answer your questions in the comments!

This post is an oldie but goodie from the archives. I first shared What’s The Best Milk For Keto in 2020.