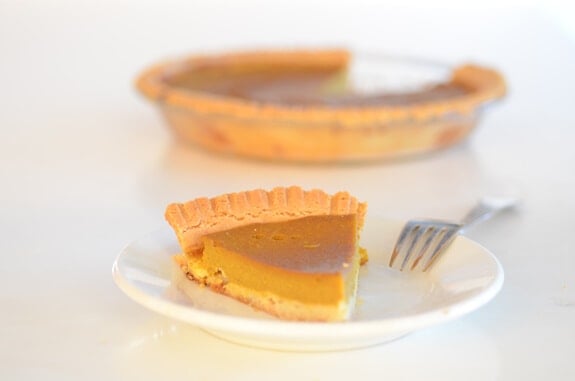 This simple Paleo Pumpkin Pie is a classic Thanksgiving dessert for the whole family. Food allergies or not, it’s so good nobody will ever know it’s gluten-free and dairy-free!

After receiving more requests for a Paleo Pumpkin Pie recipe than I could count, I had to set to create a recipe for you! This healthy Thanksgiving dessert will be the star at the end of your holiday meal. It took dozens of tests batches to perfect this quick and easy recipe for low-carb Pumpkin Pie. Better yet? It uses a mere 6 ingredients in its filling.

After I perfected this recipe with canned pumpkin, I went ahead and tested it with homemade roasted pumpkin at the insistence of my older son. He wanted to make sure that you, my readers could make this low-carb Pumpkin Pie either way and was adamant that I test it both ways to ensure that it worked. The level of quality control in this house is incredibly high! 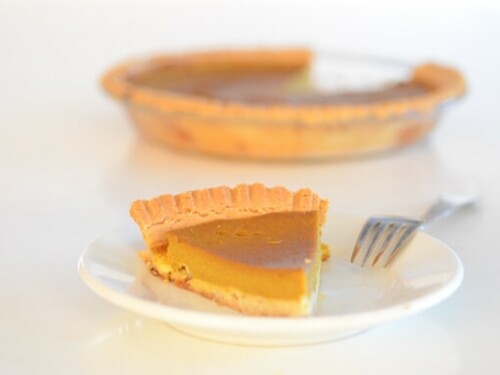 For this Paleo Pumpkin Pie recipe, be sure to use the 23 cm (9 inch) pie dish. My crust looks so pretty because I pressed the Low-Carb Almond Flour Pie Crust dough up over the edges of the pie dish and then made little indentations with a fork. When I baked the Paleo Pumpkin Pie I covered the crust edge with a pie crust protector.

This gluten-free Thanksgiving dessert recipe is so simple that my son made it several times back when he was 15 years old. The result? Kid approved. His friends ate more of these Paleo Pumpkin Pies after school than you could imagine. They thought they were having a treat, while I knew I was loading them up with a healthy, highly nutritious dish full of protein and beta-carotene.

Here are some of my other low-carb pumpkin dessert recipes:

This post is an oldie but goodie from the archives. I first shared this recipe in 2013.