Home › Wellness › Kitchen › What Not to Buy for Your Kitchen? My Declutter Kitchen Mission! 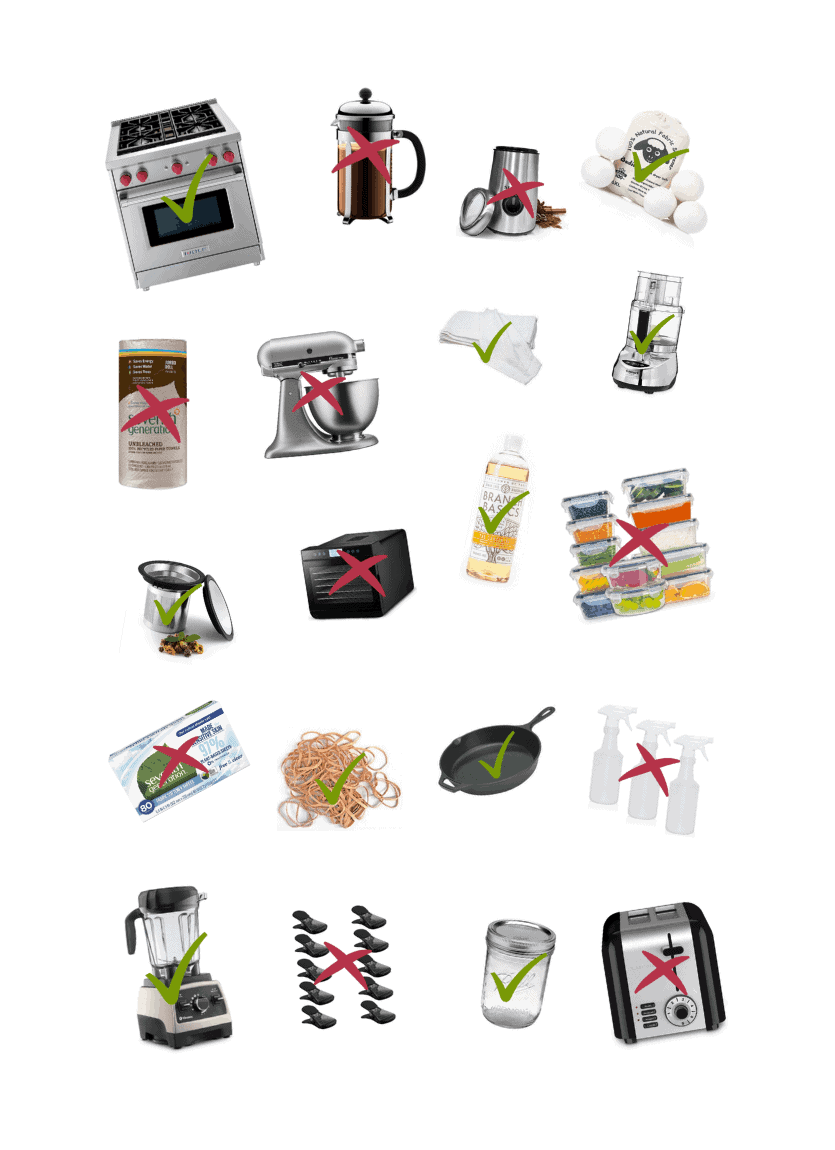 I know most kitchen experts tell you that you need to buy more, but I’m here to tell you about my declutter kitchen mission so that you know what not to buy for your kitchen.

We need less, not more!

Here are my tried and true findings for kitchen items you can swap out or avoid altogether. Why? Because more stuff means more clutter in the kitchen which makes cooking more complicated.

What Not to Buy for Your Kitchen! Swap Out

Personally, I prefer to work in a sparsely outfitted kitchen with plenty of space to move around. What does this look like?

I want to open drawers that are half empty and 100% organized.

I’m on a declutter kitchen mission, and unlike every other food blogger during this time of year, I’m going to teach you what NOT to buy.

Decluttering is the secret to kitchen success. It makes cooking fast, fun, and easy! Below are my favorite kitchen tools, all multi-purpose, if they’ve landed a coveted spot in my line-up.

You don’t need more than this. Here we go!

Instead of a 4 Slice Toaster Use a Cast Iron Skillet

I set up my first toasterless home over 30 years ago. Each subsequent house we’ve lived in has been the same. Why? Toasters take up space, contributing to a cluttered kitchen.

More important though, is that a toaster is a scary hiding place for gluten filled crumbs. One piece of bread with gluten creates a danger zone for me and my older son, who was diagnosed with Celiac Disease in 2001, a couple of years after I was.

Finally, toasters are expensive. Instead, I use a cheap and sturdy cast iron skillet.

Instead of a Stand Cake Mixer Use a Cuisinart Food Processor

True confession! I haven’t ever owned a stand mixer machine, and this is a key component of my declutter kitchen mission!

Where do people find the space to store those things? It’s like landing an aircraft carrier on the kitchen counter! They’re freakin’ expensive too.

My favorite kitchen appliance, an all time multi-tasker and WAY cheaper, is a food processor, which I use it to mix:

And much, much more!

I keep my immersion blender stowed away in a drawer for when I want to make whipped cream since I don’t have a stand mixer to do that job.

These two small kitchen appliances –food processor and immersion blender, take up less than half the space of a stand mixer!

Instead of a Dehydrator Use the Oven

Guys, if stand mixers are an expensive way to clutter your kitchen, then foregoing the purchase of a dehydrator machine is a no-brainer.

Use the oven with the light on and the temperature off. Dehydrating is like placing something in the sun, you want it to get crisp and dry out. Your oven does a dang good job of this.

Mine has worked for this since I started seriously cooking during my Ayurveda and Yoga Teacher’s Training back in 1993.

Instead of a French Press Use a Tea Strainer

I’m a total grinch when it comes to the French press. Instead, I make coffee and herbal tea in a mason jar with a tea strainer. Nothing fancy, but it gets the job done.

Instead of a Coffee Grinder Use a Vitamix Blender

While we’re on the topic of coffee, let’s talk about coffee grinders. They’re very cute…little Vitamixes. Anything a coffee grinder can do, a Vitamix can do better.

And the Vitamix does far more than grind coffee.

I bought my Instant Pot a few years ago and never looked back. It de-cluttered my kitchen, replacing my crock pot, pressure cooker, yogurt maker, and more.

Instead of Small Plastic Containers Use Small Glass Containers

Glass mason jars are perfect for making coffee, storing food, pencils, flowers, and everything else you can think of.

Small glass jars don’t leach like plastic and are far safer when they come into contact with food.

But enough of that, to learn more about the benefits of using glass, check out my article called, Why Glass?

Instead of Paper Towels Use Cloth Kitchen Towels

I keep paper towels in my kitchen for really tough messes, things like broken glass, cat vomit, and the like. However, they’re hidden away for these “special” occasions.

My go-to? Cloth kitchen towels which I keep within easy reach for everyday cleaning and wiping up the counter.

I ran an environmental consulting company in the early 1990s, and conservation is near and dear to my heart. I started using reusable dish clothes and hiding the paper towels a few decades ago.

Reusable kitchen towels are a win-win for the environment and your pocketbook.

Use Rubber Bands Instead of Chip Clips

I confess I have total chip clip envy. Those little do-dads are just the cutest thing!

But do I really need one to seal a bag of pork rinds? Actually, no. A rubber band saved from a grocery store produce purchase will easily get the job done.

Instead of Disposable Plastic Spray Bottles Do This

We are spending money to throw things away. It’s that simple.

I’ve been making my own non-toxic cleaning sprays in the same plastic spray bottles for decades in order to avoid buying and throwing away single use plastic bottles.

I also don’t want to bring toxic scented products like Windex into my home.

If you don’t want to make your own cleaning products, use Branch Basics to reduce the use of single use plastics and money!!!

I recall when a friend walked into the house, and I asked if she had been burning a scented candle. No, she told me, her clothes were “fresh” from dryer sheets.

This is not a simple, innocuous household product that merely makes your clothing smell good. It does much more than you bargain for.

Dryer sheet dangers: this product is made with polyester, now known to contain BPA, as well as toxic chemical fragrances with endocrine disrupting substances that can interfere with thyroid function and lead to weight gain.

Personally, with a compromised blood brain barrier, things like dryer sheets literally smell fifty times stronger to me than they do to the average human. Some days this is torture.

But I digress. Protect your sense of smell, reduce waste, and save money with these reusable wool dryer balls.

The holidays are a great time to protect the planet, clean out the clutter, and give away what you don’t use.

Instead of buying a friend more stuff, give a friend or loved one the gift of your time. You can bake, clean, or organize, and do something fun together!

Offer to support a friend with an activity that will be a bonding experience to make their life easier. Right now is the time to buy less and give more.

This post is an oldie but goodie from the archives. I first shared My Declutter Kitchen Mission in 2019.