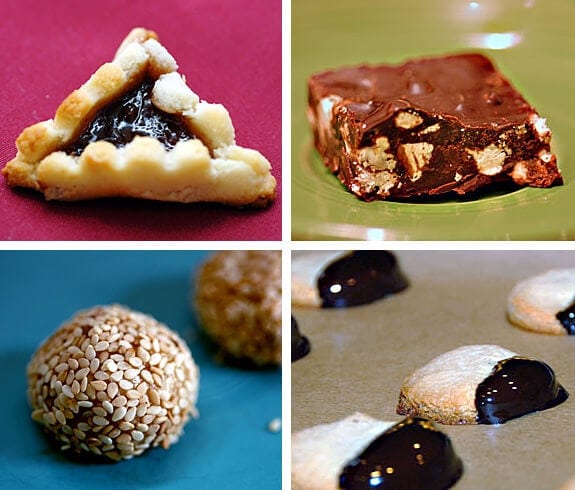 Purim is here! One of my favorite festivals (it’s not a holy day) Purim is a wonderful time to gather together with family and friends.

For those that aren’t familiar, Purim, (like so many other Jewish holidays and festivals) involves the story of the attempted destruction of the Jewish people, the subsequent redemption to “freedom” and much feasting. Hooray for freedom and feasting! Hooray for Jewish celebrations!

Yesterday afternoon, we had a Purim Party at our house during which we made Shaloch Manot and told the story of Purim which goes something like this:

Around 1,400 years ago, The Jews were living in exile under Babylonian rule (this all takes place in ancient Persia, or modern day Iran). A really ‘bad” guy named Haman who was an adviser to the Babylonian king decided that all the Jews should die. The king’s wife (who I will briefly here describe as a “closet Jew” came out). She declared herself Jewish, charmed the king with her intelligence, beauty, and Jewishness and convinced him to spare the Jews. Her brother Mordechai helped too. The Queen’s name was Esther.

So there you have it. And I hope I have not offended any of my tribe with this very abbreviated and flip description. For more information go to the Book of Esther.

Of course, telling the story of Purim is an essential part of this celebration and much fun. Whenever the name of the “bad” guy is said, all the children make noise to drown out his name. This gets very loud. Thankfully we also made Hamantaschen, Peanut Butter Cups and Mounds Candy Bars, none of this quite so noisy. Much fun was had by all and after the children left I swept and then scrubbed chocolate off the floor on my hands and knees with a damp rag –trust me this is a good workout and very satisfying.

Here are some fun ideas for holiday desserts that you can make for your friends in celebration of Purim. Even is you’re not Jewish, go ahead, have some of our fun.