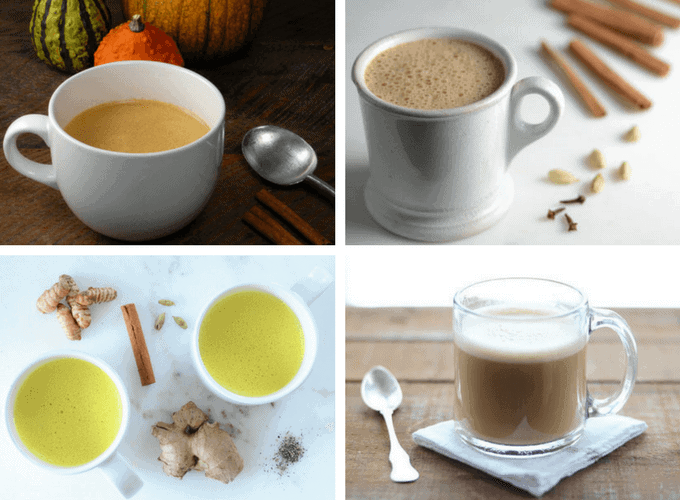 Superfood Lattes are not a fad, they’re here to stay. As more people turn away from coffee, and caffeine in general, they’re choosing super food drinks full of nourishing ingredients. I made the switch in the early 1990’s during my multi-year Ayurvedic training.

Back then we were taught that caffeine is not a good choice for those that are healing their adrenals. And so that was the end of coffee for me. You can read more about it in my 5 Reasons to Give Up Coffee post.

I love drinking warm, soothing beverages all year round. Sometimes that may be an herbal tea, but at others I want something sweet and hearty. That’s where my Superfood Lattes come in. You may be wondering, what is a superfood latte? It’s simply a drink that is full of healing ingredients.

I developed my ultra-healthy Pumpkin Spice Latte recipe back in 2012. Little did I know then that this drink would launch the superfood latte trend. This healthy variation of the classic PSL served at the corner coffee shop contains caffeine-free Dandelion Coffee, coconut milk, and antioxidant rich spices, including cinnamon, ginger, nutmeg, and cloves.

You’ll sidestep a major carb-bomb with my superfood version of this classic latte. Each serving has less than a teaspoon of sweetener. I make mine with fresh roasted pumpkin or butternut squash, but in a pinch you could experiment with canned pumpkin. To take your superfood PSL up a notch, use fresh nutmeg, which you can learn all about in my quick and easy How to Grate Nutmeg tutorial.

My healthy PSL was such a hit that I followed it up in 2014 with my one-of-a-kind Paleo Chai Latte. This healthy breakfast drink contains 2 eggs, lightly cooked while blended into the remaining superfood ingredients which include super spices and coconut oil.

You can sweeten this drink with a date, or if you’re following a Keto Diet, use stevia, or another low-carb sweetener of your choice. The eggs in this superfood latte top it with an incredibly frothy foam. This is the most popular of my superfood latte recipes!

Often referred to as turmeric tea or golden milk, this popular latte is a coconut milk decoction of magical healing spices. The Golden Turmeric Latte is not just nourishing, it’s a smooth, silky, and soothing treat.

Turmeric, typically known as the primary ingredient in curry, packs a healthy punch due to its high curcumin content. This antioxidant gives turmeric its vibrant golden-orange pigment, and offers numerous health benefits. Due to its amazing ability to optimize cytokine production, curcumin helps maintain the body’s normal inflammatory response. In addition to supporting joint health, curcumin nourishes the gastro-intestinal system, and is beneficial to both the heart and liver.

I call this an “instant” latte because it’s made with dandelion tea bags instead of fresh ground herbs. Once you try my Instant Dandelion Latte this caffeine-free classic will become your new favorite cup of morning joe!

If you’re looking for a fresh brewed caffeine-free herbal drink you’ll definitely want to try my Dandelion Root Coffee, made with roasted dandelion root and chicory. Both of these drinks are incredible liver cleansers and a great way to start the day! My Instant Dandelion Latte is sweetened with stevia and spiked with rich, creamy coconut milk.

My Chestnut Praline Latte is made with a caffeine-free Dandelion Coffee base, coconut milk, warming spices, and real chestnuts. Like all of my superfood lattes, my version is far lower in carbs than what you’ll typically find at a coffee shop. In addition to skipping the sugar, you’ll also avoid artificial flavorings and chemicals.

I love making this superfood latte as a dessert during autumnal evenings. It’s also a great Christmas drink. Although I don’t drink alcohol, I’ve heard this is incredible with a shot of brandy or rum!

I created these simple superfood lattes over the years because I want the whole world to have healthy recipes that are easy to make! All of these drinks are caffeine-free which is a plus for people like me. To take things up another notch, dandelion root has liver cleansing properties, a crucial factor for anyone living in our modern, somewhat toxic world.

A Superfood Latte is a Low-Carb Latte

These low-carb lattes are great for people following a Ketogenic Diet! Traditional lattes bombard your body with carbohydrates, but these low-sugar and sugar-free alternatives will give you true energy and a boost of real nourishment. Replacing caffeine and sugar with a superfood drink is a win-win! What’s your favorite superfood latte?