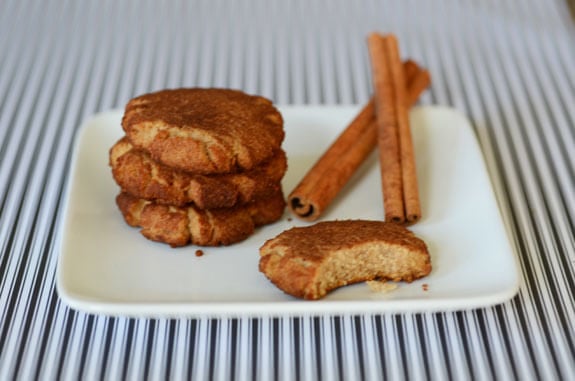 Paleo Snickerdoodles made with low-carb almond flour and antioxidant rich cinnamon are very special. First, they taste amazing. Second, the low-carb ingredients won’t spike your blood sugar. On top of that, cinnamon is a fantastic blood sugar stabilizer, so these cookies are extra healthy!

Here’s what Wikipedia has to say about this classic cookie:

A snickerdoodle is a type of cookie made with butter or oil, sugar, and flour rolled in cinnamon sugar. Eggs may also sometimes be used as an ingredient, with cream of tartar and baking soda added to leaven the dough. Snickerdoodles are characterized by a cracked surface and can be crisp or soft depending on preference.

My Paleo Snickerdoodles are dairy-free and made without butter, wheat flour, and eggs. If you would like to make vegan snickerdoodles, use agave instead of honey in this easy recipe.

If you haven’t yet bought my third cookbook, Paleo Cooking from Elana’s Pantry, you’ll definitely want to check out the search inside feature. This New York Times Best Selling cookbook contains the easiest paleo recipes you’ll ever find!

Here are some of my other healthy Paleo dessert recipes: