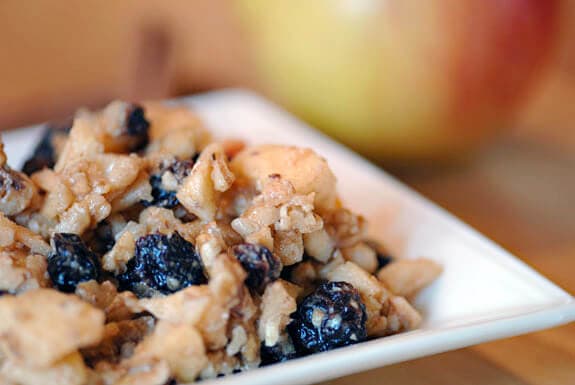 This healthy Charoset recipe is one of my favorite foods to make at Passover. During the Seder, this sweet, fruity dish holds a special, symbolic place. It reminds us of the mortar that the Jews used to bond bricks while enslaved in Egypt.

European, or Ashkenazi Jews, traditionally use nuts, apples, cinnamon, and sweet wine for this dish. Jews of Middle Eastern descent, or Sephardic Jews, commonly use raisins, figs, dates, and sesame seeds. In general, Middle Eastern Jews have a far richer culinary tradition than European Jewry and this classic Passover dish is no exception.

You’ll find that my healthy Charoset recipe is a blend of the two traditions, and much lower in sugar than other recipes of this type.

Made with only 6 healthy ingredients, this recipe is very easy to prepare. I love easy Passover recipes! My boys adore this dish because it’s something they’ve grown up with every year at Pesach, and it’s incredibly delicious. I usually make one batch of Charoset for our Seder. And of course, I make an extra batch for the boys to snack on. Needless to say they devour it.

Here are some of my other healthy Paleo Passover recipes for you!