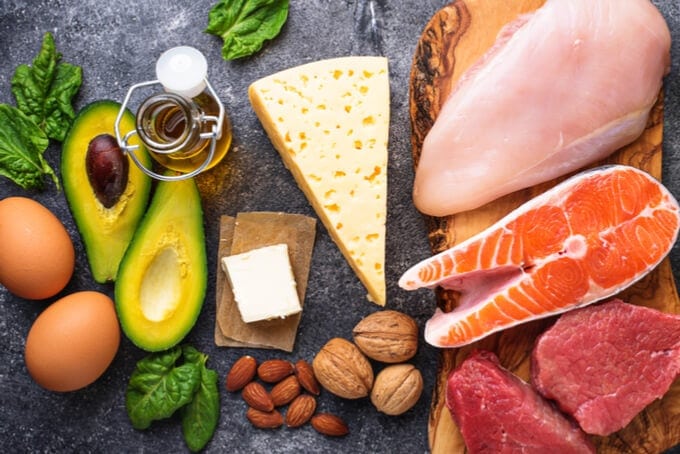 The Low-Carb Keto Diet is not only incredibly popular, it has been shown to heal illnesses ranging from epilepsy1 to cancer.2 Although this diet seems to have suddenly appeared, there’s a long historical tradition of low-carb diets. They date back decades, to folks like Dr. Atkins,3 as well as hundreds, if not thousands of years prior.4 Here’s a helpful history of the low-carb keto diet for you!

Following the Keto Diet Since 2014

I went on a Keto Diet in 2014. In addition to the benefits, I’m super excited to share the history of the low-carb keto diet with you. Why? Because it’s the perfect intersection of my college education (BA in history from Columbia University) with the self-taught medical research skills I’ve gained over the last 25 years of studying yoga, Ayurveda, and traditional medicine.

Since I went Keto in 2014, I’ve loved learning more about the history and science behind it. During this period I’ve also compiled a guide to all of my low-carb, high-fat (LCHF) recipes for you. You’ll definitely want to check out my Keto Diet Recipes page if you’re a follower of this incredible diet!

Right now I’m providing macros for all three of my Low-Carb Cookbooks. I haven’t yet gone through the 1,000 free recipes on my website yet to calculate nutrition info but I’m working on it! If you’re deciding between my books, the third one, Paleo Cooking from Elana’s Pantry has the best low-carb recipes. And I share a sneak peek of every single macro in this New York Times best selling cookbook!

The History of Low-Carb Keto Diets

Understanding the Low-Carb Keto Diet is more urgent than ever. More than 80% of adults in the US are now considered overweight or obese.5 Those of us at the forefront of the Paleo Diet movement know that this hasn’t always been the case. Mankind’s original diet is that of a hunter-gather who eats animal protein and forages for nuts and berries.6

Low-Carb Diets in the Age of Enlightenment

During the agrarian period of the last 10,000 years or so is when man became afflicted with the diseases of civilization.7 Due to these issues, we see some of the first organized attempts at low-carb diets during the Age of Enlightenment, the period from around 1685 to 1815. During this time European philosophy, politics, and science were radically transformed. Knowledge of dietary medicine also grew tremendously. In the 1790’s, just after the French Revolution, John Rollo, a Scottish military doctor reportedly treated patients with diabetes with a low-carbohydrate diet.8

Low-Carb Diets in the Victorian Era

In the 1860’s, William Banting, a formerly obese Englishman published his, “Letter on Corpulence Addressed to the Public” which outlined a diet for weight loss in which he gave up bread, sugar, beer, and potatoes.9

In 1923, a doctor at the Mayo Clinic designed the Classic Ketogenic Diet. Created by Dr. Russell Wilder as a treatment for epilepsy, it is considered the original Ketogenic Diet. According to the Charlie Foundation a 4:1 ratio of fat to protein and carbs is the gold-standard for classic Keto, a 3:1 is also included in descriptions of the classic Keto Diet in most publications:

Classic Keto is a structured diet. The ratio of this diet can be increased for a more therapeutic outcome, and also liberalized for better tolerance. This diet is also considered a low glycemic therapy and results in steady glucose and insulin levels.10

In the late 1950’s Dr. Richard Mackarness published the book, Eat Fat and Grow Slim.11 This book challenged classic calorie theory and praised healthy low-carb, high-fat primitive diets, that lacked processed modern foods, such as those followed by the Inuit. A number of other low-carb diet books and papers were published during this time.

In 1972, Dr. Robert Atkins came out with one of the most influential diet plans of the 20th century. His book, Dr. Atkins Diet Revolution, has sold over 15 million copies. Atkins believed in complementary medicine using acupuncture, ozone therapy, and herbs in his clinic. His low-carb diet approach was based on the work of Dr. Alfred Pennington a physician who used the diet during WWII. Pennington’s work on the subject was published in the Journal of the American Medical Association12

What is the Best Keto Diet?

The question I’m asked most often is, what is the best Keto Diet? Since we’re all biochemical individuals this question is a bit tricky. I followed a 1.5:1 Keto Diet for a while, but found I do best on a 1:1 Keto Diet, due to an increased need for protein due to healing from multiple sclerosis. Following the 1:1 Keto Diet means eating the same amount in grams of fat as from protein and carbs combined.

How Do You Define the Keto Diet?

People follow the Keto Diet in many different ways and this list of resources and papers documenting its history is by no means exhaustive!. Do you follow a Low-Carb, High-Fat (LCHF) Diet? If so what’s your definition of the Keto Diet? Leave a comment and let me know!