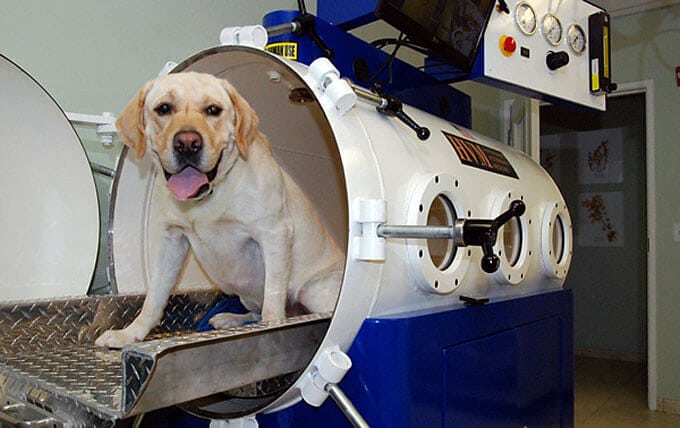 What is Hyperbaric Oxygen Therapy?

Hyperbaric oxygen therapy, or HBOT, is a medical treatment in which pure oxygen is inhaled, in a total body chamber while atmospheric pressure is increased. The Food and  Drug Administration (FDA) has approved hyperbaric oxygen therapy for treatment of 13 conditions, including stroke, burns, and carbon monoxide poisoning. These uses for HBOT are covered by insurance and recognized by the medical establishment.1

Recently, medical research (including  several double blind studies) points to hyperbaric oxygen therapy as a coveted neuro-therapeutic method for brain repair, which may be good news for those suffering from autism, post traumatic stress disorder (PTSD), traumatic brain injury (TBI), cerebral palsy, multiple sclerosis, chronic fatigue syndrome, migraine headaches, metabolic disorders (which can lead to dementia and Alzheimer’s), as well as other neurological disease, impairment, or dysfunction.2 Despite such studies, the medical establishment seems to remain skeptical of the efficacy of HBOT in such “off label” uses. Due to overwhelming anecdotal evidence however, numerous doctors are beginning to see the efficacy of HBOT, and have begun to take it seriously, and give it a chance.

In a recent ESPN article on football, concussion, and TBI, Dr. Lee Fox of Jupiter Medical Center said that he wondered if HBOT could help the brain recover from long-term trauma. “A head injury is really just a wound of the brain,” according to Fox, “Why wouldn’t it work on a different type of wound?” Fox has eloquently summed up my personal view as well.

How Does Hyperbaric Oxygen Therapy Work?

HBOT is believed to jump start the body’s own healing processes by forcing oxygen deep into the tissues. During HBOT treatment the patient is placed in an enclosed pressurized environment while breathing 100% oxygen (ambient air contains 20% oxygen). The complementary components of this process (pressure and oxygen) transpire simultaneously, and work synergistically. The tissues are saturated with pure oxygen, and the pressurization of the chamber forces the oxygen deep into the tissue. This process pushes oxygen beyond the hemoglobin (red blood cells that carry oxygen) and into the blood plasma and interstitial fluid, (fluid between the cells)3 reaching tissue that has been traumatized and damaged by hypoxia.

Patients in medical grade chambers typically “dive” to 7.5 PSI (pounds per square inch) and 1.5 ATA (atmospheres absolute), for 60 minutes at the prescribed pressure, though more severe injuries may require a longer HBOT session, i.e., more time inhaling oxygen under pressure, and may require treatment at a greater ATA.

There are three types of chambers for Hyperbaric Oxygen Therapy treatment:

I have not witnessed HBOT treatment in a group chamber, but have heard it is highly effective.

As for individual hyperbaric chambers (which are also referred to as “hard” chambers) I’ve seen two types. The first looks like the cockpit of a tiny airplane. In this type of chamber the patient sits up. The second type of individual chamber is a bed enclosed in a hard acrylic bubble, this type allows the patient to lie down.

In either unit, the chamber is locked and sealed and then the patient is put under pressure. When the desired pressure is reached, the patient typically puts on a plastic hood and breathes 100% oxygen for one hour. After the hour, the chamber is brought back to normo-baric pressure (it typically takes about a minute per square inch). A patient would need around 9 minutes to get to a PSI of 9. It would also take 9 minutes to come back to normo-baric pressure from a PSI of 9.

HBOT home chambers look like tents and are referred to as “soft” chambers. They do not allow the patient to dive to the same depths as medical chambers and are therefore not thought to be as effective. Home chambers (which provide mild-hyperbarics) are legal in the US, though not in Canada.

Typical HBOT treatment may consist of 40 one hour sessions 5-6 days per week. By doing the treatments consecutively it is thought that new capillaries are forced to grow (this process is called angiogenesis) in tissues that may be oxygen starved, or suffering from hypoxia. Treatment is prescribed by a doctor and is customized to the individual’s condition. Some patients will receive a prescription for 80 treatments at sessions greater than one hour, and pressures higher than 1.5 ATA.

As previously mentioned, during HBOT the body’s natural healing processes are activated when oxygen is pushed  beyond the red blood cells and into blood plasma. Although no experts, nor studies that I reviewed, make the claim that HBOT can revive dead tissues, studies do indicate that damaged tissues can be revived by HBOT treatment.

Here are some of the observable cellular benefits of HBOT:4

As mentioned, double blind studies have shown the effectiveness of HBOT in treating victims of stroke, burn, and delayed wound healing. Other studies show improvements in a wide variety of quality of life issues; here is a comprehensive list of the conditions that HBOT can improve according to the medical literature:

In 2010, Dr. Paul Harch wrote The Oxygen Revolution, the premier book on HBOT, a comprehensive and worthy read. Dr. Harch has published several studies on HBOT, and has a website with extensive medical information. According to Harch, “Hyperbaric oxygen therapy improves the quality of life of the patient in many areas when standard medicine is not working.  Many conditions such as stroke, cerebral palsy, head injuries, and chronic fatigue have responded favorably to HBOT.”

A bill was introduced to congressional committee in January of 2015; if passed it would ensure access to HBOT at military medical facilities. There is significant anecdotal evidence that HBOT contributes to the healing of concussion and TBI.8, 9, 10

Olympic Swimmer Michael Phelps has used HBOT during his recovery, as has professional golfer Tiger Woods.11 In 2012, the Hall of Fame quarterback, Joe Namath, began HBOT. He had such great success, as documented in SPECT scans of his brain and cognitive testing, that he founded the Joe Namath Neurological Research Center in Jupiter Florida along with doctors Lee Fox and Barry Miskin, who plan to conduct a study testing the effects of HBOT on 100 people suffering from prolonged symptoms of brain injury.

Side effects of HBOT include potential build up of fluid in, and rupture of the middle ear, claustrophobia (individual chambers are tiny and locked), as well as myopia in certain rare cases; though doctors report that the retina returns to its normal shape and eyesight is restored within a few months of the conclusion of HBOT.12

Apparently, the use of treatments akin to hyperbaric oxygen therapy date back a couple hundred years, with some anecdotes suggesting such treatments first began in the 17th century.

In the 1930’s the military developed and tested HBOT to treat deep sea divers with decompression sickness. Otherwise known as the “bends,” decompression sickness occurs when a scuba diver comes to the surface of a body of water too quickly, causing nitrogen to build up in the body, and dangerously so in the brain. The treatment for the bends is HBOT (increased pressure with 100% oxygen).

As mentioned above, HBOT is an efficacious treatment for certain conditions suffered by humans; it is also a treatment used for animals. According to this paper from a veterinary journal:

Hyperbaric therapy utilizes several physiologic principles of how oxygen responds under pressure. The increase in concentration of oxygen in solution, based on its solubility under pressure, increases the diffusion gradient for its delivery deeper into tissues, which is the premise of HBOT. Ultimately the increases in dissolved oxygen generated by hyperbaric therapy have several physiologic effects that can alter tissue responses to disease and injury. As this technology becomes more available to clinical practice, HBOT should be considered as a therapeutic option [for animals].13

HBOT became a popular treatment for pets in the early 2000’s as an adjunct to traditional medical treatments. Before this a number of veterinarians had used hyperbaric therapy in small animal facilities. However, as HBOT gained popularity in the veterinary field, large animal hyperbaric chambers were developed and placed in many veterinary practices, rehabilitation facilities, and educational institutions in multiple countries. HBOT is now routinely used to treat swelling, trauma, non-healing wounds, and other ailments in animals including dogs, cats, ferrets, rabbits, and horses.14

Studies demonstrate that HBOT may assist in the healing of numerous conditions for which it is not currently approved by the FDA. Anecdotal evidence points to incredible results with HBOT for a variety of neurological conditions including autism, TBI, PTSD, and much more.

Whether or not you believe HBOT is an efficacious treatment or a scam, there is a lot to learn about it and the potential of this therapy is exciting for those of us with neurological issues that appear to be untreatable. What are your thoughts regarding HBOT? Leave a comment and let us know!