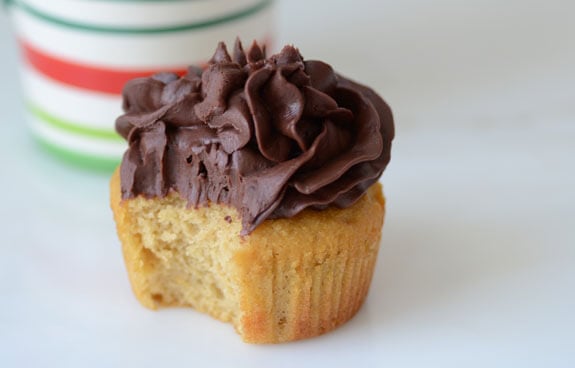 My Paleo Vanilla Cupcakes are an all-time fan favorite. That’s because they taste incredible and they’re super easy to make! This easy paleo dessert recipe is made with only 7 ingredients. To throw these together all you need is coconut flour, eggs, palm shortening, honey, vanilla, salt, and baking soda. Given that the entire batch of cupcakes contains only 2 tablespoons of honey, they’re also a fantastic low-carb cupcake recipe. If you’ve been wondering how to make vanilla cupcakes, then this easy gluten-free cupcake recipe is your answer!

Paleo Vanilla Cupcakes are perfect for your birthday celebrations. They’re gluten-free, grain-free, dairy-free, and best of all since they’re made with coconut flour, they’re a nut-free paleo cupcake. Yes, for all of you nut-free folks, this is the perfect nut-free dessert. If you are looking for more nut-free recipes, don’t miss out on my Nut-Free Recipes page.

I haven’t tried making this recipe without eggs, so not sure if that will work. If you are on an egg-free diet, check out my Egg-Free Recipes page.

In terms of other substitution questions regarding this recipe, I wish I had a crystal ball and could predict which substitutions would work and which wouldn’t. Unfortunately, I haven’t yet found such a thing! If I did it would save me the 10 rounds or so I do of testing every recipe on this website. The only way I get an answer to a substitution question is to test it. So go for it guys. Test out your substitutions, and after you do, leave a comment so that others can learn from you in this incredible Elana’s Pantry community.

Here are some of my other nut-free paleo dessert recipes for you!

Share this —
76431 shares
These are the best cupcakes with chocolate frosting I have EVER made!
— Karen