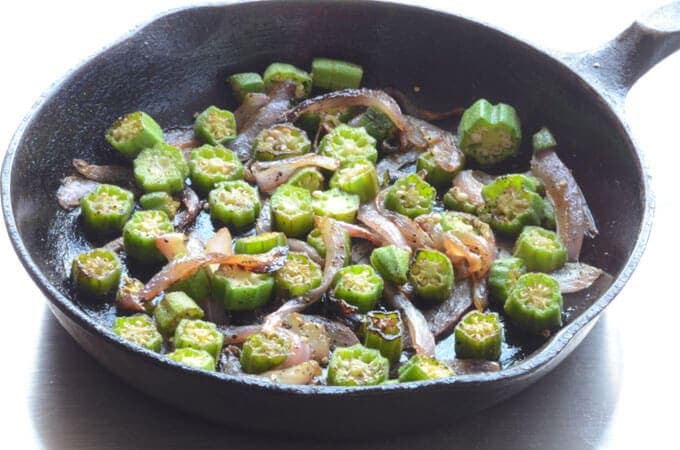 How to Cook Okra

If you’ve always wondered how to cook okra, but haven’t yet tried, you’ll love learning about it below. Okra is one of the most underrated vegetables around. It’s also one of my all-time favorites, although admittedly, I don’t cook it very often, making it a couple of times a year.

Okra is believed to have originated in Africa or Southeast Asia, it did not come to the United States until the early 18th century. This healthy vegetable is a staple in the American South where it is often fried, grilled, and pickled. Okra is also commonly used in the cuisines of Africa, the Middle East, and India. I learned all about okra back in the early 1990’s when I took my multi-year Ayurvedic training.

There are 3 types of okra -green, red, and purple. Truth be told, I have only cooked green okra. Please leave a comment if you’ve cooked with other colors of okra as I’d love to hear all about it!

When to Buy Okra

Okra is in season in from mid to late summer in the United States, approximately July to September. Okra grows best in the hot, humid climates described above.

How to Buy Okra

When you buy okra you’ll want to choose smooth, unblemished pods. It’s very important to select okra that does not have brown spots or shriveled dried ends. One trick we learned in our Ayurvedic training was that if the tips are not healthy and robust looking the okra will be tough, fibrous, and impossible to chew. If you get home and you can’t snap the end off of a pod you won’t want to stir-fry it. I toss those in the compost bin to cut my losses. I recently purchased frozen organic okra at our local health food store and it worked in this recipe too!

How to Cook Okra

My favorite way to cook okra is in a stir-fry with onions. If you can eat nightshades, okra is also fantastic with tomatoes, a natural pairing since okra and tomatoes are part of the same late summer crop.

Ingredients
Serves:
2
Print Recipe
Instructions
I found this and am so glad I did. Absolutely delicious! My husband laughed and said he never thought he would see the day that he would have to fight me to share the okra.
— Deanna

Some people think that okra is slimy. And this definitely bothers those people. I love both the flavor and texture of okra and while I wouldn’t call it slimy, I would say that it does have a unique texture. Nevertheless, I love okra!

Okra is a low-carb vegetable, containing around 5 grams of carbohydrates in a cup. If you are on a low-carb diet, check out my Keto Diet Recipes page, all of those recipes are sugar-free.

Have you ever cooked okra? What’s your favorite way to prepare okra? Leave a comment and let me know!