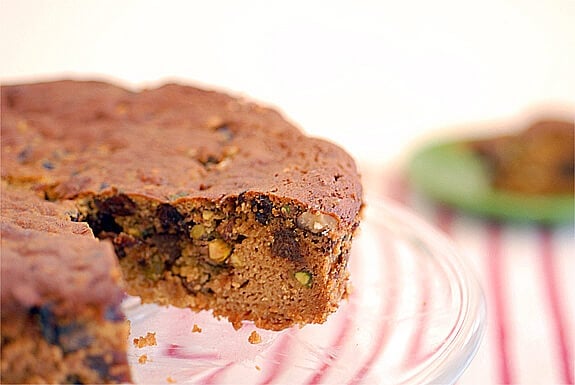 A while back, Lisa (and several other readers) asked me to come up with a gluten-free Christmas cake.  Being Jewish, and never having sampled Christmas cake, I had no idea what it was.

Lisa was kind enough to send me this definition:

I don’t cook with alcohol and really make a point of avoiding it since it is high in sugar and basically empty calories. So I substituted an orange for the usual brandy in this dessert and then took some other liberties from there.

It seems from this definition that Christmas cake is a type of fruitcake and can be many things to many people, though the one key element is that it is super sweet and full of dried fruit. My friend Patricia (of Scottish descent) told me that it can also have nuts. After checking in with her, I came up with this recipe.  Hope you enjoy it.

On totally separate note, I found this article by New York Times Op-Ed columnist Nicolas D. Kristof to be quite inspiring.  In it he discusses changing the name “Secretary of Agriculture” (head of the U.S. Department of Agriculture) to “Secretary of Food.”  His persuasive point is that while less than 2% of the U.S. population farms, 100% of that same population eats food.  The article is very liberal and reformist along the lines of Michael Pollan’s Omnivore’s Dilemma

The New York Times’ Op-Ed page is a hotbed of brilliant writing lately churning with fascinating ideas regarding food, as well as environmentalism and economics.  Between Maureen Dowd (she is ironic and hilariously funny), Kristof and Friedman they’re a triple threat with some of the best and brightest columnists in the industry.

Share this —
2598 shares
I made this cake last year and it was a hit! Everybody enjoyed it. Planning to make it this year too. Thank you for sharing the recipe!
— Linda