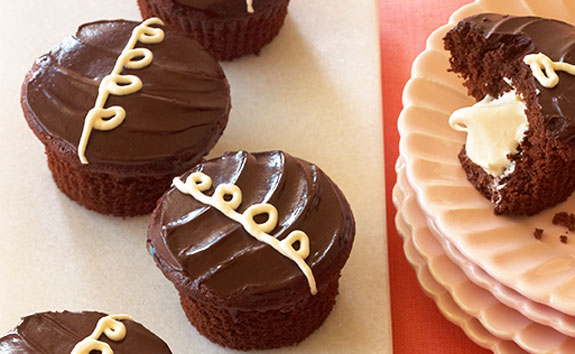 My second book comes out this Tuesday.  That’s right, Tuesday, April 26th.  The pre-release price is $9.23.  So, enough of the mini-infomercial that I promised my publisher I would write, and on to the making of
Gluten-Free Cupcakes.

My mom says that writing a book is like having a baby.  I couldn’t agree more.  However, I gained 5 pounds incubating this book, rather than the usual 20-30 that I put on during each of the pregnancies in which I bore babies rather than paperbacks. How did I gain 5 pounds gestating a book?  You try baking 17 hours a day (by the way, everything is mouthwatering at 2:00 am), trying out batch after batch of Banana Split Cupcakes until they are perfect.

Then there are the Vegan Chocolate Cupcakes; I was determined to make those.  So determined that I made them close to 50 times until they were the way I wanted them.  I think you’ll like them whether you’re vegan, carnivore or something in between.

Yes, giving birth to a book is a lot like giving birth to babies.  And upon reflection, I realize that my two books are actually somewhat similar to my two children.  My first book, The Gluten-Free Almond Flour Cookbook, is a lovable, well rounded collection of recipes.  A lot like my first son who is a bit of a Renaissance “man.”  My second book is full of adorable little treats.  My second son is sweet.  Kinda like a cupcake.  In fact, when we have gone to gluten free bakeries in New York City, where he can get whatever he wants, he always chooses the biggest, pinkest cupcake, with no shame whatsoever.

I love them both equally –my boys that is.  While I’m thrilled to be “expecting” Gluten-Free Cupcakes on Tuesday (it’s a scheduled delivery, unlike the natural childbirths of my boys, delivered midwives), I will always have a huge place in my heart for The Gluten-Free Almond Flour Cookbook. An editor is a lot like a midwife.  I was lucky enough to have my editor, Sara, collaborate with me and come up with fabulous sections for my new book.

Here are the chapters we created:

One of my favorite recipes in the book is White Chocolate Cupcakes.  How many ingredients does it contain?  Three.  Yes, a cupcake recipe with three ingredients.  Sometimes I write recipes and forget that I wrote them.  This was one of those recipes.  So when I received my galley of the book, I was thrilled to reacquaint myself with this recipe.  My other fave is the Cream Filled Chocolate Cupcakes –otherwise known as Hostess Cupcakes (pictured above in a photograph by the fabulous Annabelle Breakey).

So, enough about me, an annoying Jewish mother –bragging endlessly about her “children!”   If you want to meet my second paperback “child,” get the book, which has 50 original cupcake recipes and a dozen more frosting and filling recipes.