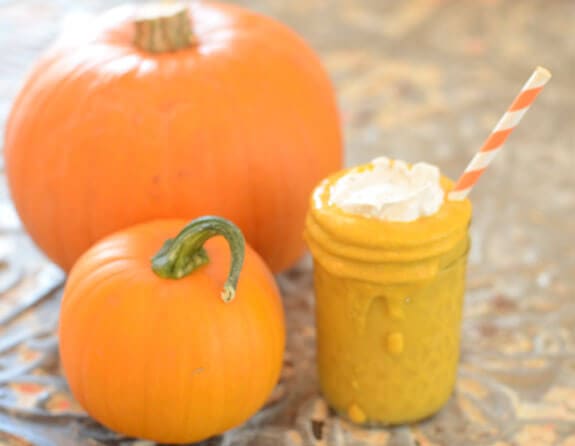 This Pumpkin Spice Smoothie is perfect for fall! It’s also great for those times when you’re in the mood for a Pumpkin Pie but don’t want to go through the hassle of baking one. It’s made with baked pumpkin or squash. Remember, a pumpkin is a squash. For the smoothie depicted above I actually used one cup of red kuri squash. When the weather gets a little chilly I tend to bake a pumpkin or squash a couple of times per week so that I have a mason jar of freshly baked pumpkin on hand at all times for fall recipes. I haven’t tried making this Paleo Pumpkin Spice Smoothie with canned pumpkin, so not sure if that would work.

For those of you that are stevia averse, I would suggest making this with either 1-2 dates or a tablespoon of maple syrup or honey in place of the stevia. For the topping, I used coconut whipped cream, however, you can use real whipped cream if that suits you. This Pumpkin Spice Smoothie tastes like a frozen, ice cream-ish version of pumpkin pie and I love whipping one up in the morning after I work out or in the afternoon for a quick pick me up.

The health benefits of pumpkins are numerous. Loaded with magnesium, zinc, vitamin A, and vitamin C they are also a fabulous source of fiber. Pumpkins are packed with anti-inflammatory compounds and polyphenols that can protect the eyes, lower cholesterol and reduce joint pain. Low in calories and high in fiber, pumpkins are an amazing food.

I’ve blogged here at Elana’s Pantry since 2006 and have come to realize that in the world of special diets there are many particular needs! It seems that whenever I share a recipe folks want to change it, and I love that. Having food allergies and intolerance means we all have to do our best to take care of ourselves.

I made this recipe numerous times with various proportions of the ingredients in the recipe and the others outlined above (re: sweeteners). I tested and changed items until this Pumpkin Spice Smoothie tasted just right. I drank a lot of Pumpkin Spice Smoothies along the way! But I want to know, how will you change this recipe to meet your needs? What can and can’t you eat? Leave a comment and let me know!