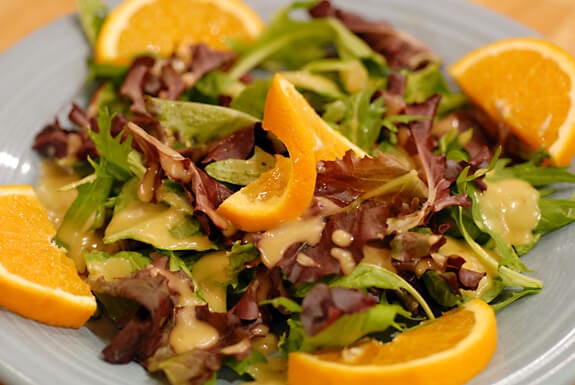 ) lately and pumping out quick dinners.  Still, I make my own salad dressings every night and this Mustard Marmalade Dressing is no exception.

I’m just back (less than an hour ago) from the ADA conference in Denver where I met many wonderful people and had a great time.  The conference was at the Denver convention center and it was massive –there were probably 5,000 people there, maybe more and thankfully, there was a lot of interest in my gluten free cookbook.

Celiac disease and the gluten free lifestyle have been garnering more attention of late, which is good for all of us gluten freers.  We don’t have to feel like freaks in public anymore now that gluten free is more well known.

Still, as I enjoy some of the gluten free yahoo groups I often hear the saddest stories about people with celiac/gluten intolerance who dine out with friends and are given a hard time not only by waitstaff, but by so called friends as well.  As if eating differently wasn’t enough trouble already without being harassed about it!  I’m just sayin’.

I hope you all enjoy this tasty gluten free salad dressing!  I’m off to spend some time with my boys who I don’t want to feel neglected.  They are far more important than any book could ever be.

Share this recipe —
Nutrition
There is no Nutrition Label for this recipe yet.
previous
Dealing with Chronic Disease
October 21, 2009
56
More Posts
next
Zucchini Chocolate Chip Muffins
October 16, 2009
51
Previous Next