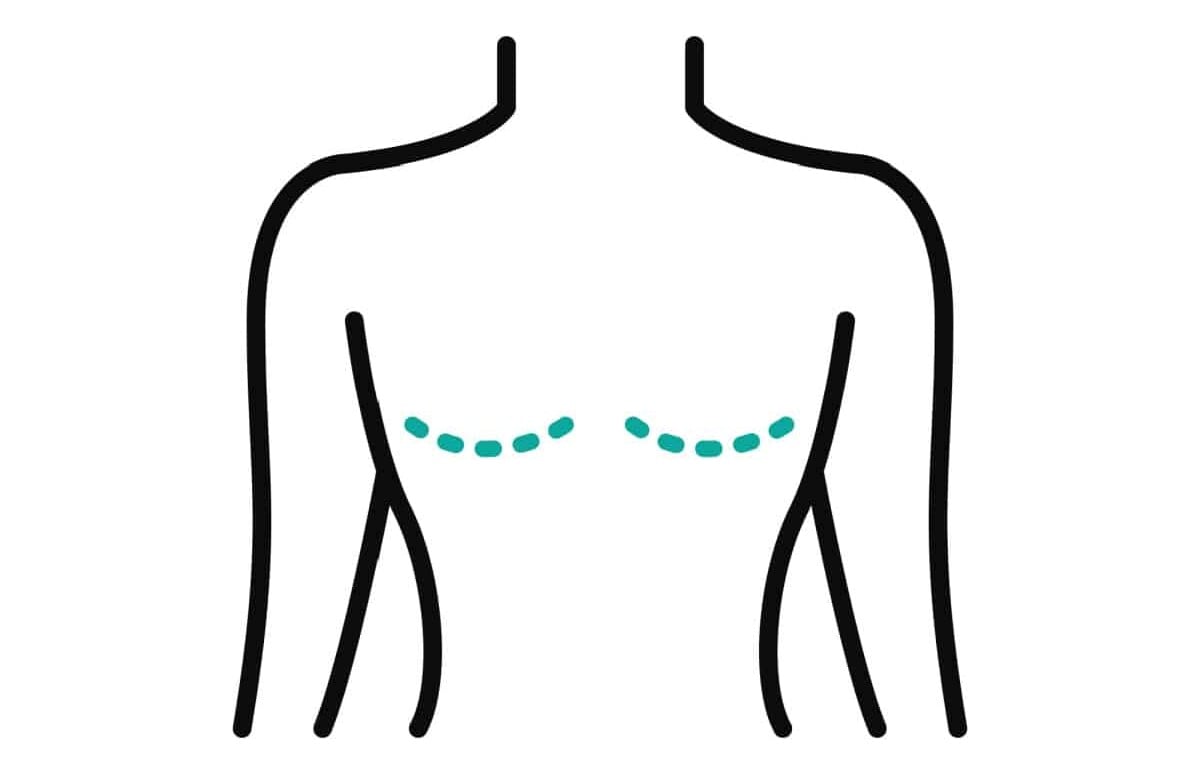 As I write this, I am closing in on 9 months since I had a mastectomy to have my breasts removed.

In the time since that surgery I’ve suffered from constant physical pain and emotional confusion.

People tell me I am brave. I am not brave. I am tired and I am despondent about the way our medical system treats women’s bodies, including my own.

It all started with the cancer found in my right breast during the summer of 2021.

After that, I faced many medical forks in the road, the first of which pertained to the type of surgery I would have.

Lumpectomy is a breast-conserving surgery where only a portion of breast tissue containing the cancer is removed. A mastectomy is when the entire breast is surgically removed.

Mastectomy made sense for me on a number of levels.

Mostly because I have the BRCA genetic mutation which made my lifetime risk of breast cancer 500% higher than the average woman’s,1, 2 and also gave me a much higher risk of recurring cancers.

It made sense to have my breasts taken off, and since cancer doesn’t follow a schedule, I began interviewing breast surgeons and researching different types of mastectomy stat.

I seriously considered breast reconstruction. But, along the way, as I continued to research, I realized implants were not the right choice for me, and I decided upon mastectomy with flat closure.

What is a Flat Closure Mastectomy?

With flat closure, the breast is deconstructed and entirely removed, then the tissue is tightened and smoothed out to create a symmetrical, flat chest wall.

For my mastectomy, I chose one of the top breast surgeons in the country, at a world renowned university.

As I look back, it becomes apparent that “my doctor never mentioned that going flat was an option.”3 I figured it out on my own and asked her for it, but I’ll get to that later.

According to Katrin Van Dam, author of Flat and Happy, “This omission during the surgical consult is regarded by researchers as the mildest form of a phenomenon called flat denial.”4

As an aside, in a study conducted by Dr. Deanna Attai, a breast surgeon at UCLA, over 20% of women who ask for flat closure experience flat denial.5

In fact, leading women’s health expert Kim Bowles coined the term “flat denial” when her surgeon unilaterally implemented his own ideas about her mastectomy after she made clear, both verbally and in writing, that she did not want implants.

When Flat Denial is Medical Battery

As Bowles lay on the operating table, drinking in the anesthesia, her surgeon told her, I’m just going to “leave a little in case you change your mind.” She woke up with empty sacks of skin ready for future implant surgery, in direct violation of the flat closure she asked for.

A woman with cancer undergoing an amputation should not feel like she’s being roofied at a frat party.

Bowles has dedicated her life to flat closure advocacy, determined to turn her pain and medical betrayal into progress for others. Her website Not Putting on a Shirt, is a must visit if you’re having a mastectomy.

My Surgeon and Mild Flat Denial

When I met with my surgeon to discuss my upcoming procedure, she did not offer flat as an option.

I had to let her know that I wanted to “go flat.” In turn, she questioned it extensively, which did not seem to indicate a problem since this was a very permanent decision.

While we spent quite a bit of time discussing whether or not to reconstruct my breasts with implants, she was far less interested in fielding my questions about flat closure and hurried the conversation along somewhat dismissively.

I continued attempting to get answers from her on a number of potential outcomes, including the types of scars I would be looking at every day for the rest of my life.

Buyer Beware: the Start of my Mastectomy Nightmare

Her initial response was a nonchalant non-answer.

When I asked again, she stated: they’re going to be big scars, and you’re not going to like them.

I should have run the other way.

Her peculiar behavior did not stop there.

The surgeon then identified one of her patients to me, sharing a name and photo, breaking doctor-patient confidentiality.

This may not seem like a major issue, but trust me, you want a surgeon who follows standard operating procedures because if they don’t, it’s a sign that bigger mistakes may lie ahead.

The Grind of the Cancer Industrial Complex

In retrospect, everything is glaringly obvious, but at the time, I was not feeling like myself, dealing with cancer on top of MS, celiac disease, and more.

Beyond that, the machinery of the Cancer Industrial Complex just grinds you down.

I now realize I should have canceled this operation when the surgeon displayed the tiniest bit of impatience and disregard in our conversation about my surgical outcome.

Putting Breast Cancer Behind Me

We all know, though, that twenty-twenty hindsight is everything because when I look back on the mastectomy, I recall that I was full of hope and so ready to put the entire shitty cancer experience behind me.

Along those lines, when I woke up from surgery in February 2022, I had a huge smile on my face.

Unfortunately, my relief had a short half-life.

After surgery, when I peered down into the bandages, a lopsided, hollowed-out result stared back at me.

A Painful Trench of Skin and Bone

Odder still, was that while the left side, the side with cancer, had a chest wall with a smooth outcome, the right side, which I had elected to have removed in a prophylactic mastectomy, was a little trench of painful skin and bone.

Unfortunately, my right armpit was also rearranged without explanation.

My healthy chest wall was hollowed out.

I gave my breasts, the ones that fed my babies, to the Gods of Cancer willingly, but the surgeon took my chest wall without my consent.

As I write this, I have a number of mastectomy-related medical problems on the gutted right side of my chest that have not been addressed since my procedure.

I have lived in pain all day, every day, for 9 months.

Living in pain changes your brain.

Living in pain changes who you are.

You feel like you’re stuck in a moment that will never end.

I am truly heartbroken to say that having stage 1 cancer was less of a burden and far easier than dealing with a nightmare mastectomy result.

When I had breast cancer, I had no pain, and I was filled with the hope of many treatment options.

But now, I have a bad haircut, and it is one that will never grow out.

We Can Do Better Than This

Is this how we treat a woman after she’s suffered from cancer and had an amputation?

When Cancer Tears You Apart…

According to Kim Bowles, “The only real matter of choice in the whole cancer treatment process is the reconstruction decision, to take this choice away is cruel and avoidable.“

…And Your Choice is Taken Away

When cancer tore me apart, I wanted some say in how I was put back together.

I did not get that.