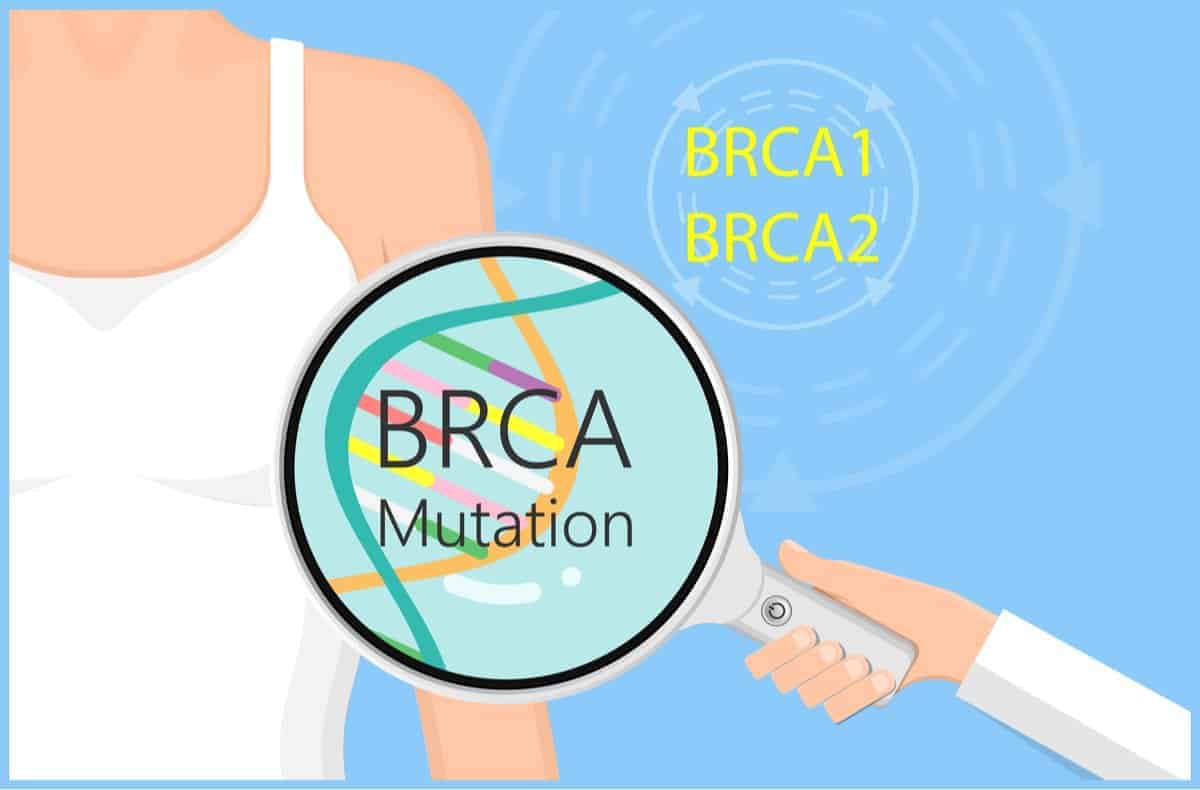 What is breast cancer genetics testing is a question I’ve been asked with increasing frequency over the years, as this type of evaluation has become more common.

I’m here to help clarify the specifics of BRCA testing and discuss how I navigate the maze that is women’s healthcare today.

What Is Breast Cancer Genetics Testing

On a simple level, breast cancer (BRCA) genetics testing is a blood test to determine if you have mutations in your DNA that increase your risk of breast cancer.

What Does the Term BRCA Mean?

The term “BRCA” is an abbreviation for the breast cancer gene, which can be inherited from either parent.

As you can see below, the shorthand is quite logical:

Where is the Breast Cancer Gene Located?

According to Ginny Jordan, a breast cancer survivor and author of Clear Cut, the BRCA mutation is located on the long arm of chromosome 13q12.

Every human has both of the BRCA genes, they are normal and in fact, do important work because they produce proteins that help repair damaged DNA.

However, the BRCA1 and BRCA2 genes have been found to impact a person’s chances of developing breast cancer.

While everyone has two copies of each of the BRCA genes, one inherited from each parent, problems may arise when a mutation occurs, as there is a higher risk of cancer.

Difference Between BRCA1 and BRCA2?

Read on for more details below.

If you take the test for the breast cancer gene mutation and you test positive, what does it mean?

Essentially, those who test positive don’t have the proteins needed to fight tumor formation and are at a higher risk of contracting breast cancer than the average person without the mutation.

What Happens If I Test Positive for the Breast Cancer Gene Mutation?

According to Sharsheret, receiving a positive test result indicates you have inherited a mutation in the BRCA1 or BRCA2 gene, or far less frequently, both of, the breast cancer genes.

If you’re wondering, does having the BRCA mutation mean I’ll definitely get cancer, the answer is no. The test result provides information about your risk of developing cancer. It cannot be used to predict whether or not it will actually develop, or when.

In summary, a positive result means a higher likelihood of cancer but doesn’t mean you’re certain to develop it.

Mutation carriers have a number of options they can consider to manage their risk, including screening, risk reducing surgeries such as prophylactic mastectomy, and medications that reduce cancer risk.

These options are best to discuss with your healthcare professional.

You may have heard of this high-risk gene variant in the media as a number of celebrities are carriers including:

While a BRCA mutation doesn’t mean you’ll automatically get cancer, those with either of the BRCA mutations have a far higher risk than the general population, i.e., those who do not suffer from the mutation.

At What Age Should BRCA Testing be Done?

Most health organizations recommend breast cancer genetics testing for women who have a family history at age twenty-five.

How Often Do I Need Breast Cancer Genetics Testing?

Whether or not you are in a high-risk category for the BRCA mutations, i.e. have a family history of breast cancer, or are an Ashkenazi Jew, you will only need to undergo genetic testing for these mutations once. It is a simple blood draw.

I was tested for the BRCA mutations in 2008 when I was forty-one years old.

I asked for this genetic test because of my double risk factors: I am of Ashkenazi Jewish descent and have a family history of breast cancer. My paternal grandmother suffered from breast cancer at an age that is considered fairly young, prior to fifty.

When I asked for the breast cancer genetic test my practitioner replied: I’ve never had anyone test positive for this, so you don’t need it.

The Power of Circular Thinking in the Field of Science

Telling a patient that they don’t need a test because another patient was negative is a form of psychic projection and circular thinking that is unscientific but not uncommon in the world of women’s healthcare.

If you’re telling your patients this story, it’s likely you’re not testing all that many of them; thus, you’re not going to get a lot of results –and at that, your anecdotal data will be highly skewed.

How to Get the Breast Cancer Gene Test

Getting the breast cancer gene test should be simple, but we know there is nothing simple about delivering women their healthcare, at least in the US.

After receiving a reply of “no” to my request for BRCA mutation testing, I told the practitioner of my family history of breast cancer, etc.

The reply remained the same. I knew that although I was at high risk of being a BRCA mutation carrier, getting this simple blood test wouldn’t be easy.

Over twenty-five years and the course of several autoimmune conditions (including celiac disease, MS, and thyroid disease) I’ve learned to navigate our stressful healthcare system. Autoimmune diseases symptoms are fantastic preparation for that.

As patients, we don’t expect to expend maximum effort to receive basic care. Yet, it is critical that we deploy every skill we have, using our powers of persuasion to get the tests and treatment we need.

Along those lines, I cheerily said to my doctor:

I’m sure you’re right! Let’s test to simply rule it out.

It was an offer so logical, there was no way to refuse.

What happened in terms of the results? You can probably guess. The test came back positive for the BRCA2 mutation and I’ve been under high surveillance ever since.

If you test positive for either (or both of) the BRCA mutations your recommended screening is surveillance every six months via mammogram or MRI.

My breast cancer screening consists of:

Prior to and for a while after finding out that I had the BRCA mutation, I did thermogram screening for my breasts.

One of my favorite Functional Medicine doctors told me that while thermography is a fantastic screening tool, it is so advanced in detecting early masses that “no one really knows what to do” with it.

What is the Difference Between BRCA1 and BRCA2?

If you test positive for the BRCA gene, it’s important to understand more about it.

First, as I mentioned, there are two types of breast cancer mutations, BRCA1 and BRCA2. Read on for more information on each one.

What is BRCA 1 Mutation?

The BRCA1 mutation is associated with an increased risk for triple negative breast cancer which is a very aggressive and difficult form of cancer to treat.

According to Facing Your Risk, the lifetime risk of breast cancer in a BRCA1-positive individual is around 65% as compared to 12.5% for a woman of average risk.

Women with BRCA1 mutation also face an increased risk of ovarian cancer of around 40% versus 1.3% for a woman of average risk.

There is also an increased risk of pancreatic cancers with the BRCA1 mutation.

What is BRCA 2 Mutation?

Facing Your Risk goes on to state that the lifetime risk of breast cancer with a BRCA2 mutation is around 60%, compared with 12.5% for the woman of average risk.

For ovarian cancer, the lifetime risk with a BRCA2 mutation is approximately 15%, as compared with a 1.3% incidence for a woman of average risk.

Those with the BRCA2 mutation have an increased risk of all of the following cancers:

If you’re wondering how many cancer stages are there the answer is four.

Why do I mention this in a post about breast cancer genetic testing? Because the two are inextricably related when it comes to catching cancer early, i.e. Stage 1.

I still remember when my Father had Stage 3 colon cancer, and he discussed it with my children. One of my boys, around 11 years old back then, asked what’s after that? My Father said Stage 4, then my kiddo asked, what’s after Stage 4? My Dad replied, “death.”

Genetic testing for breast cancer is a very reasonable way to work towards catching and preventing later stage breast cancers.

Breast cancer education is an important part of cancer prevention and treatment.

If you’re wondering when is breast cancer month it’s in October each year. In addition to raising awareness of breast cancer, it’s important to continue the effort and make sure that women have access to good cancer prevention and treatment.

Awareness and talk without proper delivery of medical services are simply chatter laced with empty promises, and women deserve better.

Here is a list of my favorite organizations that do work in, and around, the field of breast cancer:

The field of breast cancer mutations and genetics, in general, is an exciting, and emerging area of science that clinicians are still catching up on. This guide is to help you understand your options and the surrounding choices.

Do you have either of the BRCA mutations?

Or, do you find yourself having to tap dance your way around your doctor to receive basic medical services and care? Leave a comment and tell me all about it! I want to know!