Home › Wellness › Diet › What’s the Difference Between the Keto and Paleo Diets? 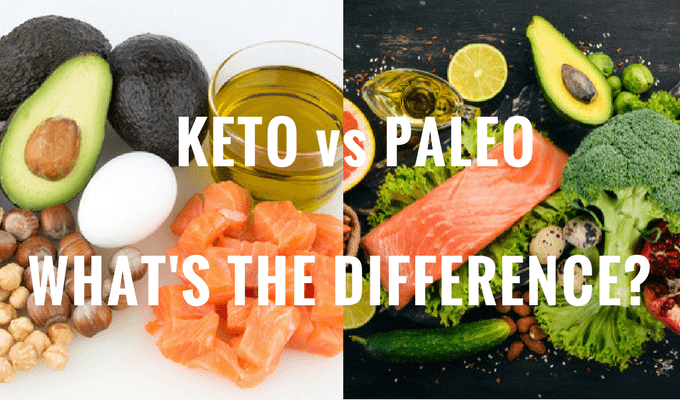 The Keto and Paleo Diets are extremely popular. Both generally focus on eliminating the high-carbohydrate convenience foods that have caused so many of the diseases of affluence in the last century. While there are similarities between the two diets they are very distinct from one another. If you’re wondering, “What’s the Difference Between the Keto and Paleo Diets?”, I’m here to help!

The Keto Diet is a low-carb high-fat (LCHF) diet that focuses on manipulating macronutrient ratios so that the majority of calories come from fat. While many believe that the Keto Diet is a sugar-free diet this is not the case. No foods are off limit. The goal is to eat carbohydrates in very small amounts, moderate amounts of protein, with the majority of calories coming from fat.

How Does the Keto Diet Work?

The body is like a hybrid car that can run on carbs (glucose) or fat (ketones). The Keto Diet turns the body into a fat burning machine. This has all kinds of benefits from reducing inflammation to restoring the proper neuro-pharmacology of the brain. The Keto Diet allows artificial sweeteners. Low-carb keto desserts often have a fair amount of corn-based products such as erythritol, which are not permitted on the Paleo Diet. The overarching goal of the Keto Diet is to burn fat and reduce inflammation in the brain and throughout the body.

What is the Paleo Diet?

The Paleo Diet is a grain-free diet inspired by our ancestors. Most of humankind’s existence has been as hunter-gatherers. It is only in the last ten thousand years, with the advent of agriculture, that we have eaten a grain-based diet. With a focus on natural, unprocessed foods, the Paleo Diet does not include any grains or grain-like foods. Wheat, corn, rice, and other neolithic farm-based foods are not permitted. The main goal of the Paleo Diet is to heal by eating healthy grain-free, natural foods that are unprocessed. I wrote the book on the Paleo Diet, called Paleo Cooking from Elana’s Pantry in 2013, check that out for more information!

How Does the Paleo Diet Work?

The Paleo Diet works by removing modern processed foods and grains, all of which can be inflammatory. Many experience relief from aches, pains, arthritis, and digestive troubles within a month of following a strict Paleo Diet. That was the case for me when I went strictly grain-free a couple of decades ago.

What is a Keto-Paleo Diet?

I follow a Keto-Paleo Diet. This means that I eat paleo foods that are low in carbohydrates. When I eat fruit, I choose berries rather than high-carb pineapple, and I eat them with a high-fat food such as macadamia nuts or avocado. This slows down the absorption of carbohydrates and prevents a spike in my blood glucose levels which I test with this meter and these strips.

If you are interested in learning more about the history of this diet you’ll want to check out my Keto Diet Recipes page. My recipes are Keto-Paleo since I cannot digest many of the foods allowed on the traditional Keto Diet. If you’re counting macros while following a Keto Diet I provide nutrition information for all of the recipes in my latest low-carb cookbook, Paleo Cooking from Elana’s Pantry, so you’ll definitely want to get your hands on that!

I was diagnosed with celiac disease in 1998 and quickly figured out that the typical high-carb, gluten-free diet would not be my ticket to health. I went on a grain-free diet shortly thereafter, eliminating all grains and grain-like foods including corn, rice, and potatoes. All of the recipes here are grain-free and paleo. If you’re following along and subscribe to my newsletter you’re on your way to a Paleo Diet. If you need more inspiration check out my Paleo Diet Recipes page!

What’s the Difference Between the Keto and Paleo Diets?

In summary, as a reader points out so concisely in a comment below, “The ketogenic diet focuses on manipulating the three macronutrients, which are fat, carbs and protein for those keeping score. The Paleo diet is more about the food choices. You eliminate dairy, grains and processed foods, but balance the macronutrients any way you want.”