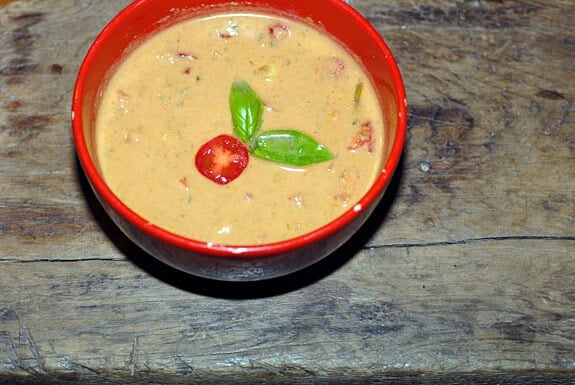 Is your garden overflowing with tomatoes? Mine is. It’s a jungle out there. The zucchini plant is on the offensive, overtly attacking its neighbors in a battle for square footage while the tomatoes surreptitiously creep and cling to everything they can. At this point, they are huge sprawling bushes, heavy with fruit.

The boys go out to jump on the trampoline and come inside bearing gifts, their little hands laden. I too venture out to pluck tomatoes off the bushes before they turn to mush or fall to the ground. I’m not complaining. They’re delicious. Some are good eaten straight up. Others go nicely on top of a green salad. With so many tomatoes there really needs to be so many ways to eat them.

In an attempt to create much needed variety, this afternoon I made a raw tomato sauce to serve over pasta. Well, I can tell you it was one of those small, satisfying successes. Our neighbors Chris and Larry (Josh’s parents) came over for dinner and ate the sauce uncomplainingly. The children all asked for seconds after it was gone so I ran out to the garden, harvested more tomatoes, some basil and whipped up another batch in the middle of dinner. My younger son drank his seconds as soup and Josh’s little sis, Zoe used hers as a dipping sauce for her green beans.

So, as you see, this raw tomato sauce is very versatile and provides a good deviation from the standard forms of tomato consumption.

This quick and easy dish can turn mountains of tomatoes into a yummy raw sauce without heating up your kitchen in the middle of August.

Are you enjoying your garden this month?  If you find yourself with an abundance of tomatoes, what are doing with them?  Let us know and please, share your recipes in the comments section!