Home › Wellness › Kitchen › How to Use the Instant Pot 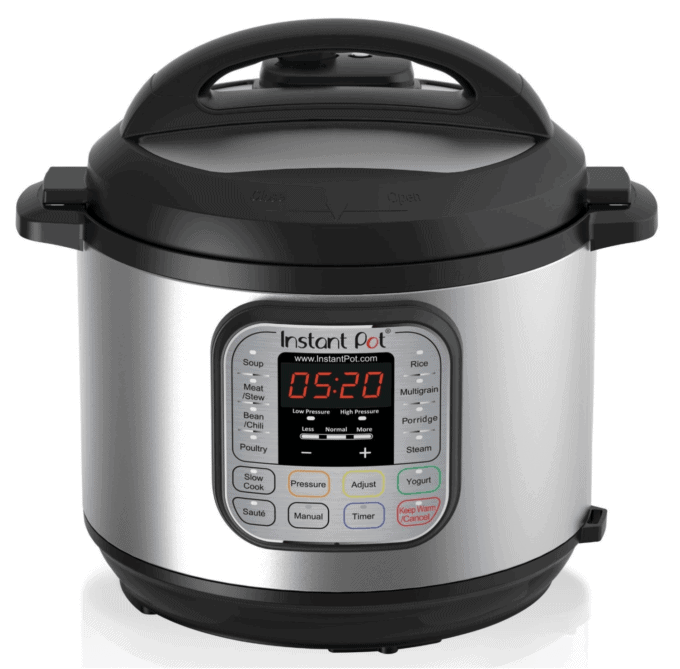 The front of the Instant Pot looks like the dashboard of a rocket ship. So many buttons and settings! When I first got mine, I was a bit intimidated. After much experimentation and tons of use I now know how to use the Instant Pot. Finally I’m an Instant Pot pro.

I’ve had loads of practice using my Instant Pot. I’ve made Bone Broth in it every week since I bought it. Sometimes I pressure cook the Bone Broth, other times I slow cook it, and I often simply keep it warm and sip on it all day. The Instant Pot has features for all of this, and so much more. Now I want to share everything I’ve learned with you!

What is Pressure Cooking?

My favorite thing about the Instant Pot is the pressure cooking feature. First though, let’s back up a bit for those of you that may be wondering, what is pressure cooking?

Pressure cooking is a method of preparing food in a sealed vessel using liquid. A pressure cooker is simply a pot with a seal and lockable lid. It also has a valve that traps or releases steam to control the pressure inside. As the pot heats, the steam is captured in it and the pressure increases. Normally, the cooking temperature of wet foods is limited to 212 °F, which is the temperature at which water boils.

When the pressure in a pressure cooker is raised the boiling point of the water is increased, and the food can cook faster at this higher temperature. Since the food cooks more quickly energy is saved. Pressure cooking is not only time saving and energy efficient, it seals in flavors and nutrients.

The Instant Pot is a Multi-Purpose Kitchen Tool

I bought my first pressure cooker in 1993. It was old fashioned compared to the Instant Pot. Still, I loved it for all of the reasons outlined above. I cooked grains in it until I went grain-free in 2001. After that I used my pressure cooker for bone broth. Since my husband doesn’t like the smell of our house when I slow cook a batch of bone broth for 48 hours, the pressure cooker is the perfect tool.

So when I bought the Instant Pot I gave up my traditional pressure cooker, yogurt maker, and slow cooker. I was so happy to gain back some kitchen real estate for a change! When the boys set up their own homes, this will be one of the first things I buy them.

The Instant Pot has Less EMFs Than Other Appliances

While my initial thoughts were around how to use the Instant Pot, once I got going and began cooking up a storm in it, I had another concern. Since the Instant Pot looks so complex, I was worried that it would have elevated levels of electromagnetic fields (EMFs). Thankfully, I measured the Instant Pot (2.7 milligauss) and it emits far less EMFs than the crockpot (9 milligauss) that I had for the last couple decades.

How to Use the Instant Pot Settings

Each button designates a type of cooking. Basically the buttons have preset cook times to make things easier for you. The setting on the buttons also indicate if the pot will be locked to capture steam when you pressure cook, or if you will be using the Instant Pot like a regular pot and cooking without pressure.

The below is a quick summary I created of the Instant Pot’s buttons, along with the pressure setting and cook time for each one.

In the table above under the column that says “pressure setting,”  you’ll see the words “high” and “low.” This indicates that the Instant Pot is cooking at high pressure with the lid sealed into place. Yes, even when the setting says “low” the Instant Pot is using its pressure cook feature. When the Instant Pot is on “normal” it is not sealed or cooking using pressure.

How to Release Instant Pot When Pressure Cooking

The natural release method allows the pressure to naturally dissipate on its own. The quick release method is engaged when you turn the valve on top of the pot from the “sealing” setting to the “venting” setting.

According to the company, the Instant Pot naturally depressurizes by dissipating heat from the cover, specifically the metal parts. Depending on the volume of liquid in the cooking pot, it takes approximately 10-30 minutes to depressurize naturally. The more liquid content, the longer it takes. According to Instant Pot you can also place a towel soaked with cold water on the metal part of the lid to cool the cooker down. This method is referred to as “natural release” in pressure cooking recipes.

Please note, it is very important to wait until the Instant Pot has released all of the steam that has built up inside before you open it and take of the lid. DO NOT EVER force the lid open as this is very dangerous!

According to the Instant Pot website, the main difference between the two main Instant Pot models is their size.

Next you probably want to know what is the difference between the Instant Pot LUX and DUO models. The DUO is simply the updated version of the LUX model. You really only need to know this if you are buying a used Instant Pot. The main difference in functionality between the new and older models of the Instant Pot is that the DUO model has the yogurt making button and the LUX does not.

Which Instant Pot Do You Have?

I have the Instant Pot IP-DUO60 7-in-1 Multi-Functional Pressure Cooker, it has a 6 quart capacity and operates at 1000W. I love it and highly recommend it!