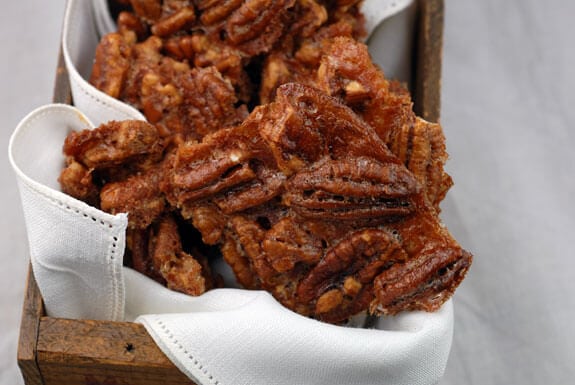 Watch out! Paleo Cinnamon Pecan Brittle is so good it’s addictive. Lightly sweetened and made with 5 healthy ingredients, it’s a wonderful holiday snack. I love serving it as an appetizer or dessert at our Hanukkah parties, but it’s so delicious that I make it throughout the year as an after school snack or lunch box treat.

I made this easy nut brittle recipe with pecans instead of peanuts so that it would be paleo, and so those of you with peanut allergies can enjoy it. It also has far less sugar than other brittle recipes, so it’s a great low-carb dessert.

Don’t let the fancy name of this dish fool you because it’s so easy to throw together, you can prepare it right before your guests arrive and enjoy the amazing smell of warm cinnamon and nuts that will fill your home as it toasts in the oven. If you’re going to a party at someone’s house, and you’re the guest, this easy desssert makes a lovely hostess gift when placed in a little tin or box, that is then tied with a pretty ribbon. 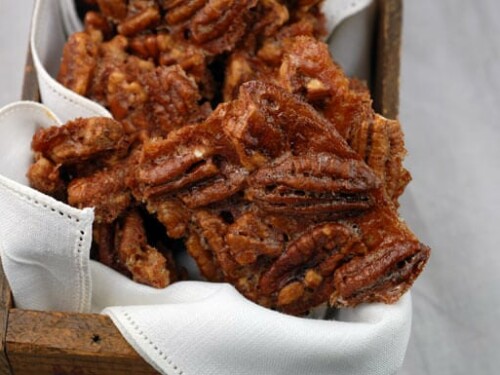 I came up with this Cinnamon Pecan Brittle recipe when I messed up something I was making from Dorie Greenspan’s lovely cookbook, Around My French Table

. I started out with a Spiced Nuts project, though when I pulled these out of the oven, I realized that I had actually made a healthy nut brittle. So, I made the recipe several additional times, tweaking each version along the way until I was pleased with this new permutation.

Here are some of my other low-carb dessert recipes!